Salasar Balaji is a holy place sited in the Churu district of Rajasthan. It is of immense importance to the devotees of Lord Hanuman. Every year millions of people pay homage to the sacred place. The temple of Salasar Balaji falls in the same campus of pilgrim centers of Khatu shyamji and Rani Sati Temple. On the auspicious day of Chaitra Purnima and Ashvin, the footfall is massive as there are many fairs organized in the remembrance of Lord Hanuman (Balaji).

The Legend about Salasar Balaji

The Thakur of Asota village was astonished to discover that Mohan Das already knew about the idol without being told, and that’s how Balaji Temple came into existence. This is the most accepted theory of Balaji’s existence. There are various others with slight modifications.

Hanuman Ji is the principal god of the Balaji Temple. The idol of Balaji is entirely different from all other idols of Lord Hanuman. Unlike Hanuman, it has a round face with a moustache. The Salasar Balaji temple came into being on the 9th day of Shraavana (fifth month of the Hindu calendar) in 1754 AD. It was constructed of mudstone initially by Maharaj Mohan Das with the help of Muslim craftsmen Dau and Noora of Fatehpur.

Later on, it was converted into a fully fledged concrete temple with the help of Sikar Jagirdar. It is said that he was once rescued from loot by the blessings of Balaji. The heirs of Mohan Das, Kaniram and Ishwardas developed the temple to its current form, inspired by their father’s devotion. 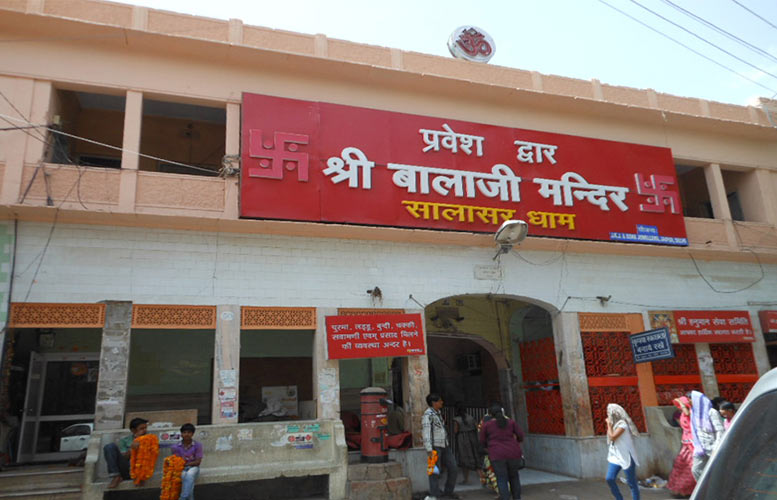 The temple is managed by a trust known as Hanuman Sewa Samiti and is physically managed by Brahmin priests. They also manage the development of the area as a whole in terms of managing the water supply, roads and hospitals in the village.

The temple remains open from 4.00 a.m. until 10.00 pm on most occasions. However, during Hanuman Jayanti, it is not closed due to the large number of people arriving there to take blessings of Balaji.

There are many traditions performed at the temple, out of them the most extensively performed rituals is tying a red thread to a coconut in the temple premises. It is believed to fulfill the wishes of people, who perform this ritual. There is also a tradition known as Savamani is which people donate food up to 50kg to the god. The food is presented to Balaji and then consumed by the family of the person submitting the food or is donated to the needy people. Balaji is, undoubtedly, the most visited places by the devotees of Hanuman. All sincere devotees of Hanuman at least visit the temple once in their lifetime.

How to reach Salasar