Padmavati Mata – India is a country that has many interesting historical and religious stories to tell. In fact, there are so many that sometimes it’s difficult to keep a track on all of them or know about all the important characters that play and important role in the lives of many people. There are several books, videos, photos, and Holy Scriptures dedicated to popular gods and goddesses, but there are many lesser known deities, who have a lot of importance in the life of a few people. One such holy entity is Goddess Padmavati revered as the protective goddess.

There are many scriptures, which refer to this goddess, who is known to have 108 names. The poojas conducted to honor this goddess or please her refer to her in 20 different ways, and one of the most popular names amongst them is Rakta padmavati. Even the pictures or drawings of this Goddess depict her seated in different manners, and her four hands hold different things according to the way in which she is worshipped. Some have her seated on a 5 headed snake while the others have her seated on a lotus flower with a 5 headed snake rising from her back. Some even depict her having 24 hands and a three-headed snake forming a canopy over her head.

Maa Padmavati is an important Goddess especially for those who follow Jainism. The story behind her worship is that the twenty-third Tirthankara of Jainism, Lord Parasvnath, had once saved two snakes from burning to their deaths. These rescued snakes then became his yaksha and yakshini, and they were known as Dharanendra and Padmavati respectively. People who worship this Tirthankara in fact worship Maa Padmavati, and there are several holy books written containing details about how the poojas are to be conducted, and one of them is known as Parasva padmavati Aradhana, which was first published in 1972 and written by one of the most famous pandits of Jainism, Shree Dhirajlal Tokershi Shah. This book is revered amongst many people because it contains in detail the various methods and ingredients required to worship Ma Padmavati and also contains stotras in her written in her honor. Panditji, as he was fondly called, had depicted the goddess seated on a snake that had a cock’s head, seated in a lotus position, holding various things in her four arms, and wearing various jewels on her arms, fingers, and around her waist. 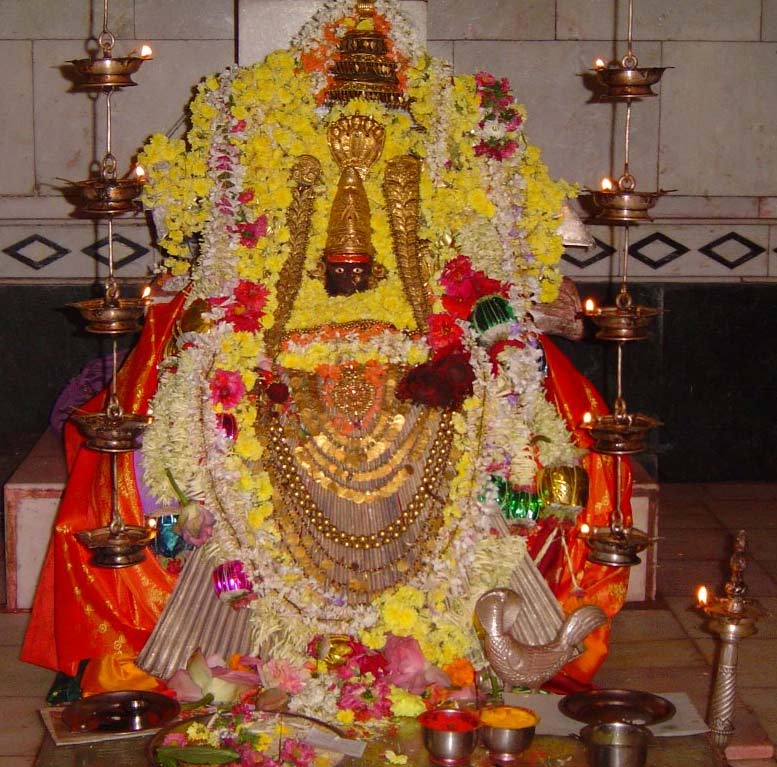 Mata Padmavati is very important because there are many idols and pictures which depict the 23rd Tirthankara etched into her crown as she, along with the yaksha Dharanendra, had protected Lord Parshvanath when he was attacked by Meghmali. One of the most popular temples dedicated to the goddess is located in Humcha, which is in Shimoga, a district in the state of Karnataka. It is believed in Jainism that Lord Indra had appointed various Yakshas and yakshinis as protectors of the Tirthankaras and other important personalities in Jainism, and that is why Goddess Padmavati too had protected Lord Parshvanath.