Navratri or the festival of nine nights is celebrated with great pomp throughout the country. India though provides a home to every religion and refuses to make any distinctions based strictly on religion, still at times establishes itself as a Hindu State, mainly because a large section of the population are followers of this religion. Thus, all the Hindu festivals are celebrated with great enthusiasm throughout the various parts of the year.

The most important Hindu festival that is celebrated with equal enthusiasm in various parts of the country under various names is Navaratri.

This is primarily celebrated in the honour of Maa Durga, who defeated Mahisashura in a battle, and thus, restoring peace and order on earth again. However, there is more to it than just that. Here are a few important facts about this festival, which everyone should know.

The principle Deity of Navratri is Goddess Durga who is otherwise called Goddess Bhavani, Ambe, Adi shakti and Goddess Amba. All these types of Durga are ascribed to Goddess Parvati.

Aside from Maa Durga, nine types of Goddess Durga are revered during Navaratri in different areas of India. Depending on the area and Sampraday, the list of nine Goddesses which are worshiped during Navratra festival are: Different Types of Navratri’s in a Year

This festival is celebrated at four different times in a year. They are:

Out of the above four, Vasant Navaratri and Shardiya Navaratri are commended by devotees with much pageantry and celebrations as they are thought to be propitious.

Shardiya Navratri is the most imperative Navaratra and is henceforth called Maha Navaratri or Great Navaratri. It is likewise called as Sharad Navaratri as it is praised toward the start of winter (Sharad).

It is fall on the first day or Pratipada of the bright fortnight of the lunar month of Ashwin.

What is the significance of Navratri?

The preparation for this festival begins from a long time back and finally on the assigned dates and time in between the months of September and October, we finally indulge into the festivities.

People light up their homes, wear new and fresh clothes and immerse themselves in worshiping Devi Durga. These nine days, the spirits remain high and everybody enjoys themselves.

It must be remembered here, that the festivals that we celebrate today were all passed down to us generation after generation.

The tradition of celebrating Durga pooja festival with such enthusiasm stems from the myth explaining the events leading to the festival.

When chaos reigned on earth under the prowess of Mahishasura, the Gods fashioned a woman, endowed with weapons and skills and sent her to fight the demon king.

She does and defeats asura, killing his pride, ego, ignorance and greed in the process. Thus, the celebration of this festival has an important symbolic meaning.

It has been mentioned over and over again in many of the ancient Indian texts to win over the evils that reside within us and emerge as a pure and sinless self, which can merge into the universe.

Pride from ignorance, greed and ego are some of the baser human evils, which we need to fight within ourselves every day. This festival marks the victory of our good qualities over the bad ones.

So, in the broader sense, the significance of this festival can be summed up as one which marks the win of good over evil and that peace will come after a reign of terror and chaos.

Thus, people light lamps in their homes to keep the evil spirits at bay and rejoice for the victory of that which is good. In Navaratri, Goddess Durga is worshiped in ten forms (Kushmanda, chandraghanta, brahmacharini, shailaputri, skandamata, katyayani, kalratri, mahagauri, Siddhidatri and Durga) with one form for each day.

What happens during Durga pooja in India?

Let us divide the political map of India into four parts- the eastern side, the western side, the southern side and the northern side. Each side has its own unique way of celebrating this festival, in tune with the culture of the people living there.

Happy Navratri or more popularly known as Durga Puja is the lifeline of festivals here. It is perhaps the most popular form of Navaratri celebrated in any corner of India.

The festival generally begins since Mahalaya, the day which marks the creation of Devi Durga. Life is said to be invoked in the idol on the sixth day and the festivities continue till the tenth day when the idol is immersed.

It is believed that during this time, Maa Durga with her children – Lord Ganesha, Karthika, Goddess Saraswati and Goddess Lakshmi come to visit her parents home and stays with them for five days after which she departs for her abode in the Himalayas.

This is a huge festival that is of immense significance to any Bengali, residing in any part of the world!

Bang opposite to the east, we have a different style of celebration. People, mainly Gujaratis indulge into a form of dancing known as Garba.

There are specific steps that are followed and people rejoice by dancing after driving away the forces of evil. In fact, Garba festivals are organized by people throughout the world during this time.

Both men and women dress up in traditional clothes and immerse themselves into this beautiful form of dance on garba songs or dandiya songs. 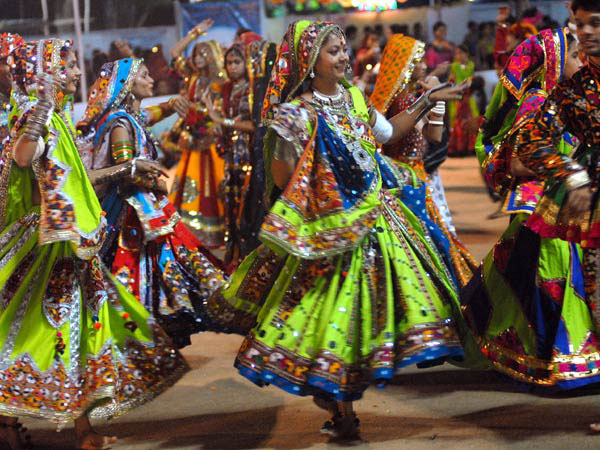 The southern part of India, especially Tamil Nadu has a whole new way of celebrating this festival. They call it golu and various small idols are arranged to form a sequence that narrates a story or create a setting.

This how the worshiping is done and ancient mythologies and folk tales are revived and retold. This can be seen as a way of passing on stories from one generation to the next, orally, since scripting of these mythologies had not been done on a large scale, before the Gupta period.

The northern side of India are hardcore worshipers of Lord Rama, the incarnation of Lord Vishnu on earth. Born as a man, solely to curb the powers and defeat Ravana, the northern part of India, celebrated Navratra to mark the victory of Rama over Ravana.

Large idols of the Ravana, with ten heads are burnt and this is known as Ramleela (the divine game of Rama). This story is told through the Ramayana, which is considered to be the greatest epic poem of India.

Talking about Rama, one must keep in mind that Navaratri is celebrated twice a year. Originally Navaratri was celebrated during the month of April which marked the victory of Maa Durga.

However, the Ramayana states that Rama wanted to pray to Devi Durga before his war against Ravana but in order to do so he had to stall his army for another six months.

Desperate to bring back his wife, Rama refused to wait and invoked Devi Durga at that time and performed the puja. It is this puja that has been passed down to us that we celebrated during the month of September and October.

The Hindu scriptures have always been credited to be very scientific and practical. Following this thought, it is important to note here that both April and the months of September and October are months of transition, which is free from any form of extreme weather conditions and hence people can indulge in the festivities to their heart’s content.

All the parts of India dress up in lights and celebrate the purging of evil and the victory of everything that is good and pure during the time of Navratri or Durga puja.

Happy Raksha Bandhan – Everything about Rakhi

Gautam buddha – Discoverer of the reality of Life