Most powerful hindu mantra and their mysterious power in Hinduism

Hinduism is possibly the oldest religion in the world. At the heart of this widely preached religion is the Vedic literature. Vedas are a collection of hymns and is winged into four major sections – Rig Veda, Yajur Veda, Sama Veda, and   Atharva Veda.  All of them are supposed to be composed between 1500 to 1000 BCE.

Vedic literature is basically a composition of mantras, which when pronounced in a certain pattern uplifts the human consciousness to a higher level of spiritual attainment. One has to have a sound dexterity to harmonize the physical and emotional self to completely procure the benefits of mantra chanting. These mantras are written in Sanskrit language. ‘OM’ is the most predominant sacred syllable in Hinduism. According to the scriptures, it encapsulates different aspects of the almighty. The references of ‘Om’ can be found innumerable times in the Vedas. Some of the popular mantras are listed below.

A verse from Vedas, Gayatri Mantra holds extreme importance in several Hindu scriptures. In literal sense, the mantra vows to meditate on the glory of creator, who sowed the seeds of the universe and embodied knowledge and light. Saraswati mantra illuminates the souls of those seeking knowledge. It is very helpful for people studying for competitions in particular and every student in general. It gives confidence and instils strong communication skills. 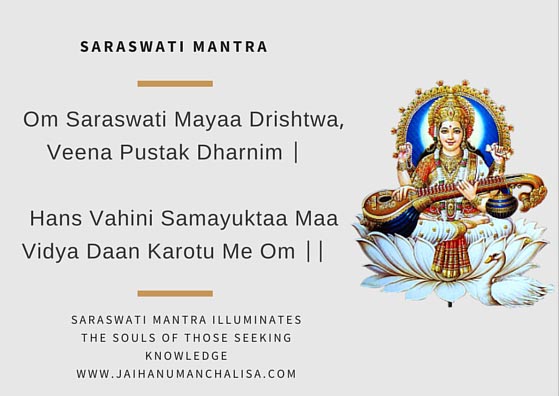 The mantra of Lord Shiva is Mahamrityunjay Mantra and is also knows a ‘moksha’ mantra. The chanter of this mantra is an address to Lord Shiva in his prays to bestow endurance with immortality.

According to Hindu mythological facts, Lord Ganesha was blessed by Shiva to be worshipped first before any other gods and goddesses. Ganesh mantra is also popularly known as Siddhi mantra. It is believed that when this Siddhi mantra is chanted with devotion, it wards of the troubles embellishing the devotee with success.

Chanting Mantra is an art and pronouncing its each syllable with perfection is artistry. Scientifically too, these mantras have a lot of importance. Pronouncing mantras in the right manner is very important as they are basically produce vibrations generating a flow of energy in the body. Therefore, mantras and meditation share a common podium. The correct chanting of Mantra takes us towards the purity of mind and soul. The state to meditate can only be attained when we understand the higher level of consciousness. Repeated chants of powerful hindu mantra reverberates our inner self, and then, we can achieve a meditative mind, which will measure itself beyond space and time.

Mantra for getting job or employment in hindi

Navgrah mantra to make the day auspicious and fruitful

Mantra to be Recited on your Birthday in hindi

Mantra to find right Guru and for spiritual progress

Mantra to Fulfill Desires and Wishes in Hindi