Maa Kali is also called popularly as Kalika. She is Goddess Durga’s mighty aspect and a Hindu deity. Kali, the word has been taken from ‘Kala’ in Sanskrit language or time. Hence, she is said to represent change, time creation, power, destruction and preservation. Moreover, ‘Kali’ is also regarded to be the ‘black one’.  She is destroyer of all evil forces. Different Shakta Tantric beliefs and Shakta Hindu cosmologies are known to worship her as Brahman or ultimate reality and as benevolent mother goddess.

Often, she has been portrayed as dancing or standing on top of Lord Shiva, her consort, lying prostrate and calm, beneath her. Throughout the country, she is worshiped especially in Bengal, South India and Assam. Her affiliation is Devi, Durga, Parvati, Mother Nature, Kaushiki and Tridevi. Her abode is in the cremation grounds. Her favorite weapon that she carries always is her sword and tiger and lion are her mount. She is also popularly called as Mahakali or the Great Kali. 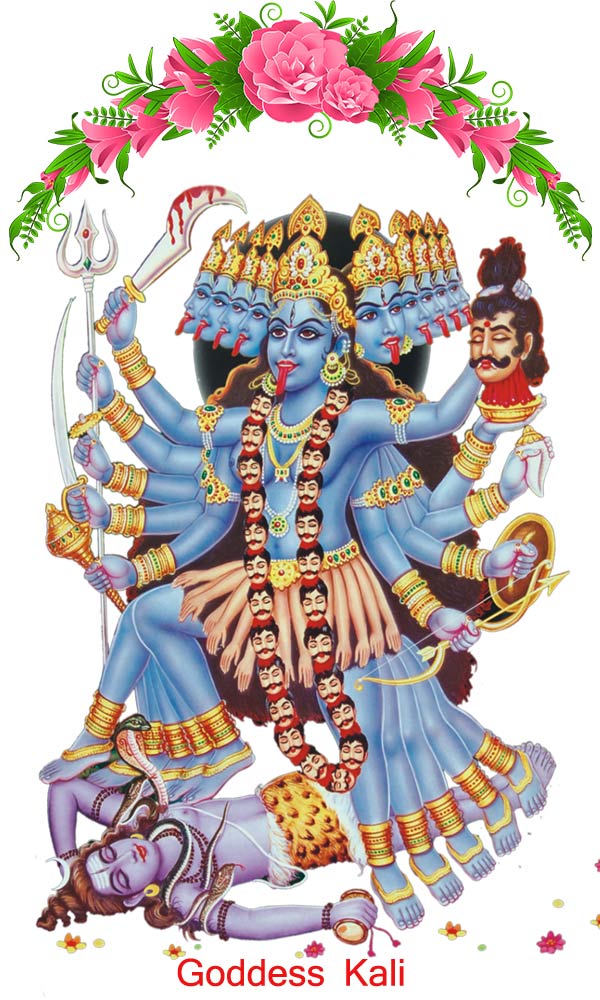 Kalam (dark, black coloured) feminine form is Kali. She is associated strongly with Lord Shiva and Shaivas tend to derive masculine Kala from feminine name. Her other popular names include Kalika (relates to time), Kallie (black alchemist) and Kalaratri (black night). The association of Kali with darkness is said to stand in quite contrast to Shiva, her consort, the body of whose has been covered with white ashes generally taken from the cremation ground, which is his place of meditation. It is for this reason Kali also has been associated as Smasana Kali.

It is during the Atharva Veda that Maa Kali had appeared, with its first usage being in Kathaka Grhya Sutra. It is among the seven tongues related to Agni that the name Kali has been given, according to Mundaka Upanishad. Her first appearance in this form is in Mahabharata’s Sauptika Parvan. She is known as Kalaratri (black night), appearing in the dreams of the Pandava soldiers. It was during the 6th century that she appeared famously as Devi Mahatmyam, one of the Mahadevi’s shaktis, defeating Raktabija demon. There are found several versions of the emergence of Kali.

The late medieval Bengali literature related to devotion has Kali as a central figure, with devotees like Ramprasad Sen. It was the Bengali tradition that had first depicted her as a motherly figure. Even her habits and appearance changed a bit.

Approach towards Maa Kali in Tantric way is to have courage displayed by confronting her late night at the cremation grounds, despite her having a terrible and fearful appearance.

In case, having a sword in the right hand, if she steps out with her left foot, then she is depicted to be in terrible Mother form, the cremation ground ‘Shamshan Kali’. Tantrics, the Tantra followers, worship her and are known to believe if spiritual discipline of a person is practiced within the samshan grounds, it brings quick success. Ramakrishna Paramahansa’s consort Sarda Devi is known to have worshipped Samshan Kali near Kolkata in Dakshineshwar.

Kala bhairava – The Most Feared Lord

Lord kalki avatar : The Destroyer of Evil in Kali Yuga