Karni Mata was supposedly born on 2nd of October 1387. She was a female Hindu guru, who was born in Charan Caste. Being worshipped as the personification of Goddess Durga, Mata is the official deity of the royal family of Bikaner and Jodhpur. In fact, the deity lived an ascetic life, and she was revered during the lifetime. When requested by Maharaja of Bikaner, Karni Mata laid the foundation of two very well known forts in the entire region.

Her most famous temple is in the small town Deshnoke, which is in Bikaner, Rajasthan. It got created after the mysterious disappearance of the Mata from her home. Her temples are famous for white rats that are very sacred and are given protection in the temple. But then, the temple is not affiliated by Jainism. There is another temple dedicated to Karni Mata, but it has no idol of hers. It only carries the footprints to depict her visit to the temple. 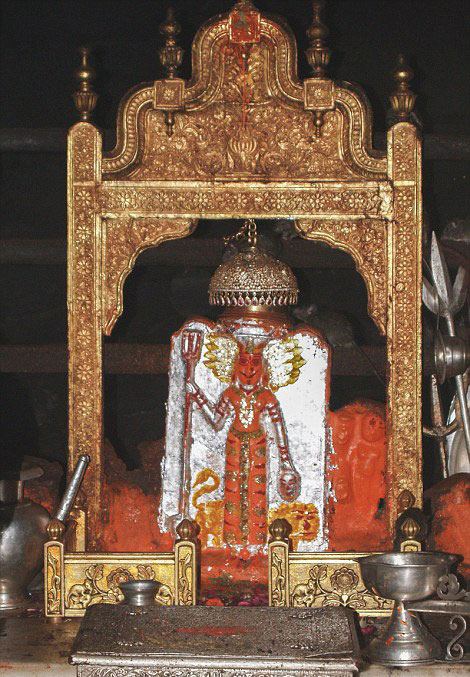 Karni Mata was the wife of Charan, the depoji, belonging to the village of Sathika. But then, the Mata expressed her wish not to indulge in a matrimonial relationship. Initially, Charan just took it lightly thinking that she would relent later, but finally, Karni Maa arranged his marriage with her younger sister Gulab. He had a proper married life. Karni Maa remained celibate all throughout her life with the support and concurrence of her husband. She stayed with her in-laws for around 2 years prior to leaving with her followers to lead a nomadic life. She camped during the sunset. One of her camps was at the Jangloo village, but Rao Kanha, the servant, denied access to water for her cows and people. Finally, Rao Ridmal was declared as the ruler of the village and continued the journey. But then, when she reached Deshnok, Rao Kanha came to oppose her camping, and ultimate Rao Kanha died. Karni Mata stopped wandering and settled finally in Desknok. In the year 1453, she blessed Rao Jodha of Jodhpur for he conquered Ajmer, Merta. In the year 1457, on Rao Jodha’s request, she went to Jodhpur to lay the cornerstone of Jodhpur Fort.

In the village of Mathania, her very first temple, Karni Mata Temple, was constructed by Amara Charan, her follower. It is great to know how she arranged the marriage of Rao Bika, Rao Jodha’s fifth son and Rang Kunwar, who was the daughter of Rao Shekha. This was just an attempt to turn the enmity into friendship. Hence, Bhatian and Rathor turned friends after the marital alliance arranged by Karni Mata. In 1485, Karni Mata laid down the foundation stone of Nikaner Fort at the request of Rao Bika. Mataji went to Jaisalmer in 1538 to meet the Maharaja.

In the year 1538, on 21st of March, Mataji was traveling towards Deshnoke with Poonjar, her stepson. When near to Girirajsar and Gadiyala of Kolayet Tehsil, she asked her caravan to wait for water while she returns. Unfortunately, she never returned. At the age of 151, she disappeared.

‘Karni Mata Temple’ is the famous Hindu Temple, which is in Deshnoke and is dedicated to her. Located 30km from Bikaner, Rajasthan, the temple is called the ‘temple of rats.’ It houses nearly 20,000 rats living and being revered extremely. They are the holy rats known as ‘Kabbas’. Many people cover great distances in order to visit the temple and catch a glimpse of the rats. The visitors from all across the country visit the temple. They get a blessing from Karni Mata, and it is believed that wishes get fulfilled here.

The details of the temple

Karni Mata temple is 600 years old and is very famous for offering protective shelter to the rats. The temple is also known as ‘Nari Mata Temple’ dedicated to Karni Mata, the incarnation of Goddess Durga. It is an unusual and popular shrine. Located in the Deshnoke, the temple is situated at a distance of 30kms towards the South of Bikaner, Rajasthan.

It is popularly believed that the stepson of Karni Mata, Laxman got drowned in the pond in the Kapil Sarovar of Kaloyat Tehsil when he attempted to sip in water. Karni Mata requested Yama to revive her step son. At first, Yama refused, but finally, relented and incarnated all the sons of Karni Mata into white rats. It is these white rats you find in the Karni Mata Temple. But then, according to the local folklore, the story is different. As per the belief or version, the strong army of 20,000 deserted the battlefield and came to settle at Deshnoke.

On learning the sin that they deserted the field, Karni Mata transformed them into rats. The offense of the strong army was punishable to death, but it was Karni Mata who spared their lives. She offered her temple as their future place to stay. The entire army expressed immense gratitude and respect towards Karni Mata. Eating the food that is being nibbled by the rats is thought to be a high honor. If even one rat is killed, that has to be replaced by a silver rat.

Karni Mata Temple is open right from the morning. Mangla-ki-Aarti is performed, and ‘bhog’ is offered in worship. Rats are offered food by the devotees. In fact, rats are considered to be very auspicious. Two kinds of offerings, namely, ‘Kalash-bhent’ and ‘Dwar-bhent’ are made. Karni Mata’s fair is held twice in a year at Deshnoke. The large fair is held in the month of March during Navratras from Shukla Ekam to Dhashmi. The Second Fair takes place between September and October. This is also during the Navratri from Ashvin Shukla to Shukla Dashmi.

In the 14h century, Karni Maa performed several miracles. Being mystic, Karni Maa lived a virtuous life that was committed to looking after poor and oppressed community. Mataji could restore the lives of all her dead sons. Karni Mata Temple belongs to the 15th century and houses 20,000 rats. Holy things are offered at her feet during the worship.