Dussehra is considered to be an important Hindu festival that is celebrated all over the country and abroad by the NRIs there. This festival gets celebrated in the lunar month of Ashwin or Ashwayuja, according to the Hindu calendar and generally falls in the month of September or October. It falls on the Shukla Paksha Pratipada, which is the day after new moon in Bhadrapada, to 10th day or Dashami of Ashwin. Moreover, it is also termed to be the culmination of 10-day annual Navratri festival (meaning ‘nine nights’ in Sanskrit).

This festival is also called as Vijayadashami that is, basically, ten-day observance of rituals and ceremonies that are celebrated with great pomp and grandeur. The festival is celebrated to cherish the victory of the mythological Lord Rama over the demon king Ravana. The festival commemorates the victory of good over evil. Different ways are followed by different community sects across the country for celebrating this grand event.

The festival also marks the beginning of winter and end of the summer season. In several cities, all over the country, Ramleela plays are organized throughout the Navratri festival. The play is based on the life of Lord Rama, where all the different interesting episodes of his life get highlighted. The artists play different roles and put their heart and soul to make the play a grand success among the audience. Also, fairs are organized that lure people in thousands all over the country, where there are items to be purchased for all ages. Children mostly love such fairs and wait the whole year to visit them, so as to enjoy to their fill.

In West Bengal, it is celebrated as Durga Puja, where the powerful demon Mahishasura was killed by the Goddess Durga. Special weapons were given by the leading gods and goddess of the Hindu mythology to vanquish the demon. She had fought the demon for 9 days and nights while killing him on the battle’s 10th day, thereby freeing humankind from all forms of evil and fear. Goddess Durga’s idols and statues are immersed into the waters after the completion of the 10-day festival and expected to return the next year. The Bengalis have actually embraced Durga like their daughter, prompting her to visit home once a year. It is on the day of Vijayadashami that she leaves for husband’s home. 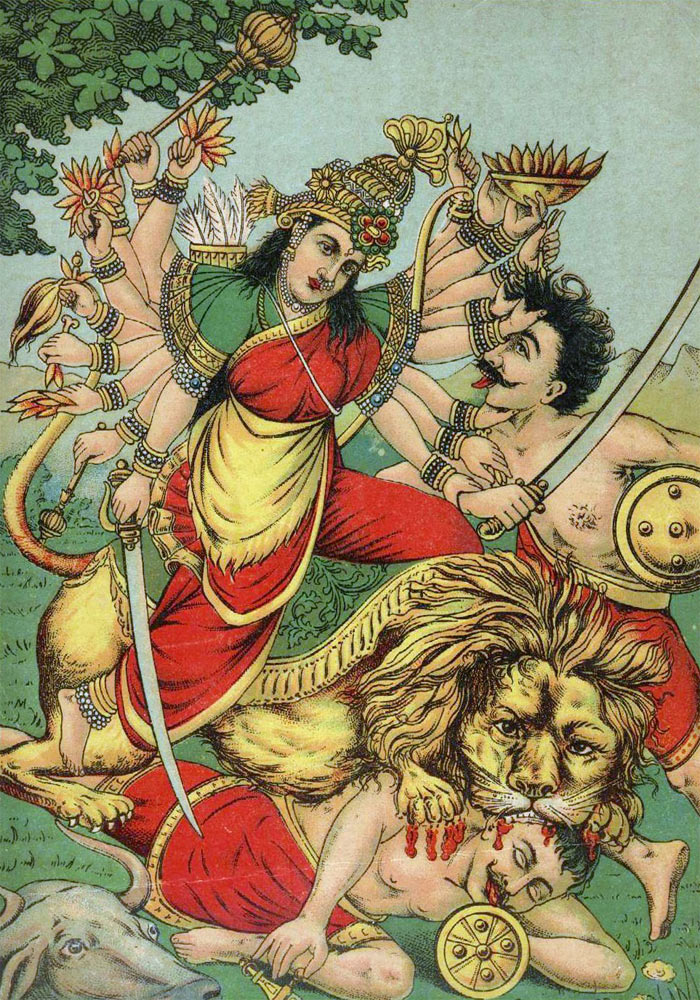 During the entire 10-day festival, houses, shops and even the streets are lit with decorated, beautiful lights. People start the preparations for the festival much in advance, given its large scale. They have their homes decorated, wear new clothes, jewellery, and prepare a variety of sweets that would be offered to the Goddess and to distribute it among everyone known. Jagran is performed for nine nights along with the Devi Naam Japa. Nine different coloured sarees are worn by the Goddess during these nine days, which includes grey (Pratipada), orange (Dwitiya), white (Tritiya), red (Chaturthi), blue (Panchami), yellow (Sashti), green (Saptami), peacock green (Ashtami), purple (Navami and Vijaya Dasami).

Other legend states, Kautsa, the Brahmin Devdatta’s young son, had been instructed to offer gold coins worth 140 million to Rishi Varatantu, his guru, as dakshina. Being a student with no personal income, he had approached King Raghu, who was generous, and in turn, had pleased Kuber, God of Wealth for creating gold coins’ rain near Shanu and Apati trees. Kautsa, this way managed to give his guru the due dakshina while distributed the remaining coins among the needy on Dussehra day. It is in his remembrance that the apati tree leaves are gathered by people in some states and gifted to the others as gold, signifying the importance of the festival.

The other mythological legends state that during the long exile for about 14 years, the Pandavas had hidden their magical weapons in the Shami tree before getting into the Kingdom of Virat for completing their last year of Agyatwas. Once that year completed, they collected back their weapons on Vijayadashami day and declared their real identities, to protect King Virat’s cattle that was being stolen by the Kauravas, defeating them. Since then, weapons and Shani trees are being worshipped every year on the Vijayadashami day, and Shani leaves are exchanged with friends and relatives as a symbol of victory and good will.

Important message to be learnt from the festival

The festival reminds people of Lord Rama’s good deeds, whose morality has been an example for humankind and to lead an honourable life. Being obedient to his parents, he fulfilled the latter’s wish to serve 14 years of exile, before becoming the king of Ayodhya. This festival does teach human beings to live life with dignity, humility, disciplined and be patient, to perform what is right and avoid wrong things to make life happy and satisfied.

Meaning of the Dussehra celebration

The meaning of Dussehra is actually ‘Dasa-Hara,’ where ‘Dasa’ stands for 10 heads and ‘Hara’ means cutting. Tall figures of Ravana are burnt on the last day of the festival, signifying victory over evil. During modern times, it signifies, calling for efforts for demolishing human ego and exuding love and peace.

Dussehra Puja is celebrated throughout the country with splendour and grandeur, with region celebrating the occasion in its own special manner. Feasting, bursting of crackers and carrying out public processions on the streets are some of the common aspects associated with the celebration. Colourful exhibitions and fares are organized during the occasion. It is fabulous to remind people of the fact that truth always triumphs and motivates them to be on the ‘dharma’ path. Different customs, traditions and rituals have their own way of celebrating this grand day. However, in modern times, there are held Garba dance and other forms, where people of all ages participate to immerse themselves completely in the fun and frolic that take place.

By mixing all rituals, customs and traditions from different states and cities, people celebrate this festival in their own way.

Happy Raksha Bandhan – Everything about Rakhi

Krishna Janmashtami date 2018, history and how to celebrate