India is a country known for its colours, culture, and celebrations. These celebrations are enhanced by the incredible array of festivals celebrated all over the country.  The festival of lights – DIWALI is one of them. Diwali or Deepavali or Kali Puja – there are various names to this one grand festival but none less grand. Celebrating wealth and prosperity, ignoring all castes and creed, Diwali brings together all and sundry to celebrate auspiciousness and grandeur.

Not just a one day, but a five-day long festival with various mythological stories that surround it, this ancient Hindu festival is, basically, believed to be a triumph of good over evil, lights over darkness and love over anarchy. While many believe it to be a celebration of the ostentatious marriage of Lord Vishnu and Goddess Lakshmi, the Goddess of riches and affluence, many worship the Lord of Devotion, Lord Ganesha during this puja.

A very famous legend behind this story surrounds Lord Rama‘s homecoming to his kingdom after his fourteen-year-long exile. It is believed that after Rama,along with his wife Sita and brother Lakshman returned to Ayodhya, the people in his realm celebrated his return with lights and crackers. Of course, there are many other legends too.

Diwali is celebrated all over India in many different ways but none with less magnificence than the other. Let us look into the regional magnitude of Diwali in the different states across the country.

Delhi starts its celebration of Diwali with Dussehra where the effigy of the villainous ten-headed Ravana is burnt to celebrate the victory of good over evil. It marks the annihilation of Ravana by Lord Rama. Shops all around close down in the afternoon, and people sweets are distributed or sent as gifts to near and dear ones. People go out shopping, and the marketplace is usually characterized by a huge crowd. Some also send silver coins,chocolates, and dry fruits as gifts. Streets and other places see artists enacting the theatrical rendition of the Ramayana during these days. People also worship the Goddess Lakshmi for wealth and prosperity and organize pujas at their houses.

In Kolkata, Diwali or Kali Puja involves the worship of Maa Kali, the Goddess of integrity. She is also believed to be the aggressive reincarnation of Maa Durga and known to destroy sin and vice. Households arrange for the puja of Kali and Lakshmi, decorate their houses with rows of lights and explode crackers with their families. Many households have Lakshmi Puja at home. It is a time to enjoy with sumptuous feasts and luxurious indulging.

Goa in Diwali is backed up by the legend of the monster’s Narakasura’s defeat at the hands of Lord Krishna. Thus, the essentially one-day festival here is started off by the burning the effigies of the demon at dawn. After the figurine of Narakasura is made, accompanied by taunts and crackers, the people cremate the effigy. Once this is over, then men return to their households. They are massaged with ‘utnem,’ a kind of oil by their wives and mothers. This is followed by a visit to the local temple by the family. After this, there is a feast of sweets, among all.

The festivities in Assam also revolve around the celebration of the triumph of good over evil. People light countless lamps and lights to decorate their houses. Some use substitute plastic lights too. Extremely beautiful lamps are hung outside some houses as a symbol to ward away anything dark and evil. One very essential part of the celebrations is the worship of the Goddess of wealth and prosperity, Lakshmi.

Houses in Assam are decorated with flowers and garlands of mango leaves and marigolds. Designs of coloured powder, known as Rangoli are made near the entrance of the house. The festivities are followed by huge and lavish feasts to as the people welcome a New Year full of happiness and luck.

Mumbai, the city of dreams, is one of the best places in India to be during the Diwali celebrations. Witnessing the grand festival of Mumbai is a huge feat. Diwali here goes on for around four to five days, each day not less grand than the other. Not only are there amazingly grand lights and illuminations, but there are also various Pujas and grand feasts that follow. People go out shopping for new clothes and various gifts for themselves and their loved ones. Other gifts include not just sweets and dry fruits, but also jewellery and silver coins or even small idols of deities.  There is a kaleidoscope of lights and ‘fire’ all across the sky as people join in in the grand celebrations. 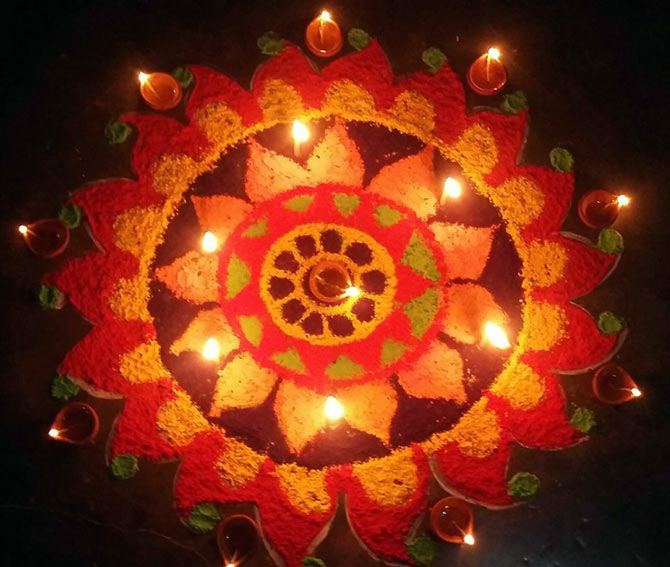 The Diwali celebrations in Orissa are not much different. Here also the households are decorated beautifully with lamps and lights. The explosion of crackers and distribution of sweets are also done. But there is only one additional custom that is followed them. In Oriya households, the people gather together and a design a boat with coloured powder where seven chambers are drawn. Each chamber has various spices and food items in them, meant for their ancestors. Then jute stems are lit up as a gesture to guide the deceased ancestors on their paths to heaven.

Kerala is probably the only state in India where the festival of lights is not celebrated with as much magnificence. Due to the absence of too many business people here, the local people of Kerala do not commemorate Diwali on a very grand scale. But, in places, where foreigners like Bengalis, Tamilians, North Indians, etc. reside, this festival is rejoiced upon with great gusto. Like most states in the country,these people too, go out with their families and friends, wearing new clothes and make merry. Plush feasts are organized, and people get together to relish on the festivities.

Hence, Diwali is certainly one of the brightest and grandest of Hindu festivals around the country celebrated with much pomp and show along with rituals!

How is Diwali celebrated in countries other than India?

Mythological Significance Behind the Celebration of Diwali

Dhanteras: The Day of Beginning of Diwali