The Hindu Goddess Bahuchara Mata is the goddess of Hijra Community. She was the daughter of Bapa, a charan, the caste residing in Rajasthan, Haryana, etc. While Bahuchara Mata was on a journey with her sisters and with a caravan, Bapiya, a marauder attacked the caravan. It was the age-old practice if a charan is overpowered or defeated by the enemies, he would kill himself rather than surrendering to the enemies. In fact, shedding of the Charan’s blood was a heinous crime.

When Bapiya attacked the caravan, sisters and bahuchar maa announced self-immolation or ‘tragu.’ They cut their breasts and as per the legends, Bapiya became impotent due to the curse. Bapiya, in order to lift the curse, worshiped Bahuchara Mata by wearing a woman’s attire. Now, Bahuchar maa is considered to be the patroness of the Hijra Community in India. Many communities in Gujarat worship the Mata.

It is believed that Bahuchara Mata was against violence, and even her followers practiced non-violence, but we have instances to show that she is just like any other Hindu Gods and Goddesses, the recipient of animal sacrifices. Bahuchar maa is seated on the rooster, which is the symbol of innocence. The Goddess adorns a sword on the top right and scriptures on the top left. She is in ‘abhay hasta mudra’ or showering blessings on the devotees.

She is the very Goddess in Sri Chakra, and her symbol of her vehicle is Kurkut. Kurkut implies the serpent having two mouths. Bahuchara Mata stays seated on the lower end of the serpent while the other end moves to Sahasrara. The other mouth of the serpent, which is in Sahasrara, implies the awakening of ‘kundalini,’ leading to ‘moksha’ or liberation.

Interesting legends surround Bahuchara Mata. One of the most popular ones is about the King, who worshipped to Bahuchar maa for an offspring. She fulfilled, his wish and he was blessed with a prince, named, Jetho. Unfortunately, Jetho was born impotent. Bahuchara Mata appeared in the dreams of the King and told him to chop off his genitalia and wear the attire of a woman and be her servant. When Bahuchara Mata saw any impotent men, she commanded the same thing. Those who did not obey her, they were severely punished. Those who refused to do so; they have to face the wrath and will be impotent in the next seven births. Devotees of Bahuchara Mata are supposed to remain celibate and self-castrate themselves.

There are, in fact, many folk many associated with goddess Bahuchara Mata. In one of the stories, Bahuchara Mata was a crown princess, who herself emasculated her husband. Actually, the one whom she married wanted to return to the forest by being dressed as a woman rather than returning to her nuptial bed. Then, according to another story, the man who tried to assault Bahuchara Mata was imprecated and thus became an impotent. He was pardoned only when he dressed as a female, returned to the jungle and worshipped Bahuchara Mata.

The most famous temple of Bahuchara Mata is situated in Bahucharaji town in the district of Mehsana, Gujarat, India. Located 110kms from Ahmadabad and thirty-five kilometres from Mahesana, the Temple complex or the main part was constructed in 1783CE. In fact, the temple of Mata is beautifully embellished with artistic stone carvings. Each and every year, millions of devotees visit the temple to pay reverence to the Goddess.

Toda Mata is the temple, which is dedicated to Bahuchara Mata. It is situated in Sankhalpur, and the very origin of Bahuchar maa is located at Varakhdiwala Temple in the Bahuchraji. There was a great ‘bhakt’ of the Mata by the name Vallabha Dhola, who wrote ‘Aanand no Garbo’ where he stated the native place of the Bahuchar maa. According to him, it is located in between Dedana Village and Sankhalpur. The very famous Temple of Toda Mata is 2km from Bahuchraji and is there in Sankhalpur.

Bahuchara Mata is just like the Goddess Ambaji or Durga. We can call her the very incarnation of Goddess Durga. In the Yantra, Bhauchara Mata is worshipped similarly like Kamakshi and Ambaji. In Bala Tripurasudra, her name is Tantrisam. We can also call her Bala Tripura. Her Panchanga and Mantras are available. The great mother, Bahuchar maa is the very giver of semen or ‘virya’ to men, who are impotent.

Those who are impotent, they worship her. She gave potency to many. Being very popular in Tantrisam, Bahuchara Mata has given Virad, Abhaya, and Vidhya, the desired boons and wealth. In fact, her temple has a pretty long history. Bahuchara Mata uses Yantra having nine triangles, which symbolize Goddess Durga. Tripyra is also one of her names, implying the controller of everything. 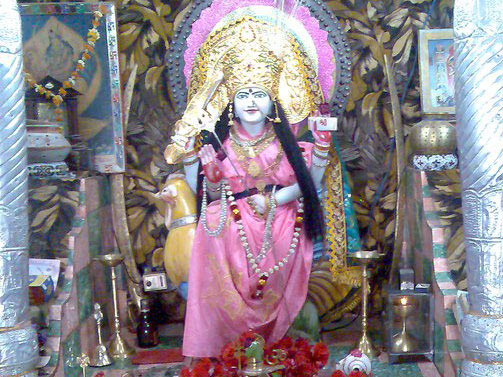 How far the folk stories are correct?

All the stories surrounding her are mythological, and we cannot say that they are true to the fullest. It is true that Bahuchara Mata was born of Charan but being a Goddess never asked for castration. This is surely a misinterpreted belief. In Gujarat, hijras are themselves born with defective genitalia. Bahuchara Mata is the very form of Bala Tripura Sundari or Tripura Sundari, which implies the incarnation of Goddess Laxmi. Bahuchar maa being the part of the Yantra holds truth. The Shree Yantra of Bahuchara Mata is worshipped at Shaktipeeths just like Ambaji of Pavagadh along with Mata’s Shankhalpur. The Hinduism world is comprised of three things, namely, three deva, three loka, three pura, etc. Goddess Laxmi is created in Sri Chakra.

The manifestation of Mother Goddess

Bahucharaji is the manifestation of Mother Goddess and the patron Goddess of Hijras. Hijras imply hermaphrodites or eunuchs. The entire community is supposed to adhere to non-violence. In general, she also stands for ‘ahimsa’ or non-violence.

Born of Charan Bapal and Detha, Bahuchara is the giver of offspring as she can cure impotence. Her devotees are mostly Hijras, who are cursed and those, who are impotent. Hijra community has a spiritual backup. Ardhanariswara, the merging of Lord Shiva and Parvatiji, has special significance to the Hijra community.